The History of ‘Sterling’

Originally inspired in 1991 by the works of Lipchitz, the sculpture was in the process of being designed when suddenly a £ sign appeared and opposing it was an ECU sign. 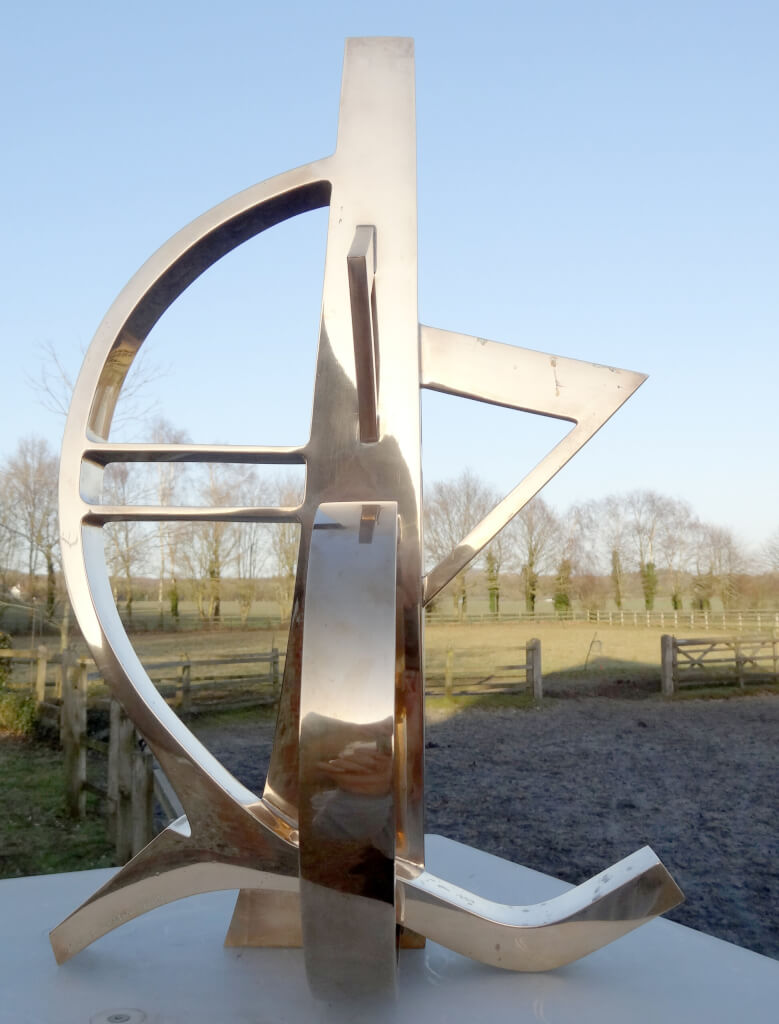 When the European currency was first construed in 1979, it was called the European Currency Unit or the ECU, for short, but eventually, in 1999, it became the EURO.

This artwork depicts the ongoing rivalry which was developing between the ECU and the POUND STERLING during those 20 years and continues to this day between the Euro and Sterling.

I was honoured to be invited to the House of Commons to meet Lady Thatcher (Mrs Thatcher at that time), in her office for a cup of tea, to discuss the work and to present her with a small maquette of Sterling.  She kept in on her desk throughout her long premiership.  The government of the day was embroiled in controversy about membership of the European market and this continued to haunt the Conservative Party and the country, until Brexit. 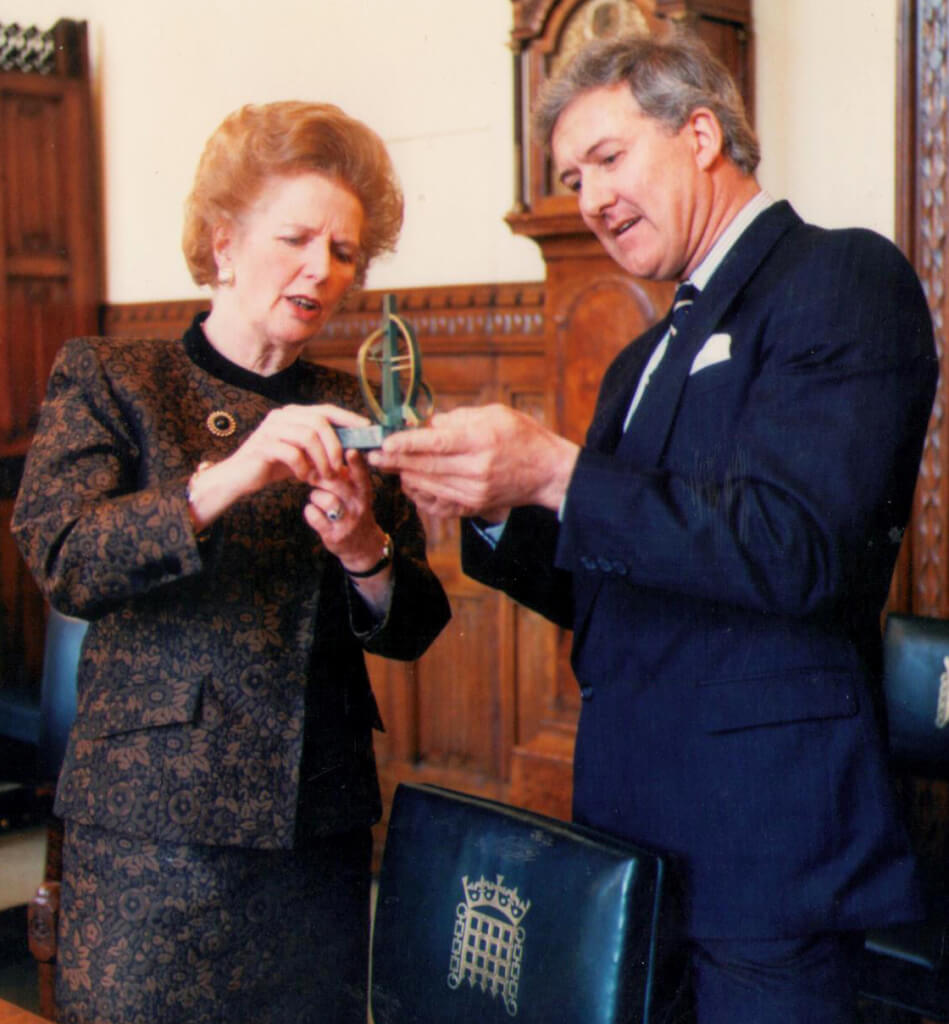 Lady Thatcher loved both the sculpture and its message so much that she discussed having a heroic cast of many metres high made for the British pavilion at the world expo which was due to take place in Seville the following year, in 1992.

Sadly, the lead time was too short and so that never happened, but she did invite me to design a similar work of art for each of the then 9 members of the Common Market, as it was then known.

Initially had only 6 members, France, West Germany, Italy, Holland, Belgium and Luxembourg, but in 1975 when the UK joined there were 9 countries including Denmark, Ireland, and Spain. The number grew to 28 and now, after Brexit, there are only 27!

In 1992, Lady Thatcher was keen to have the proposed European Bank based in London.  She had made a plan to build a large riverside city building with an entrance similar to the UN building in New York where each country would be represented by their national flags sited next to one of my sculptures. 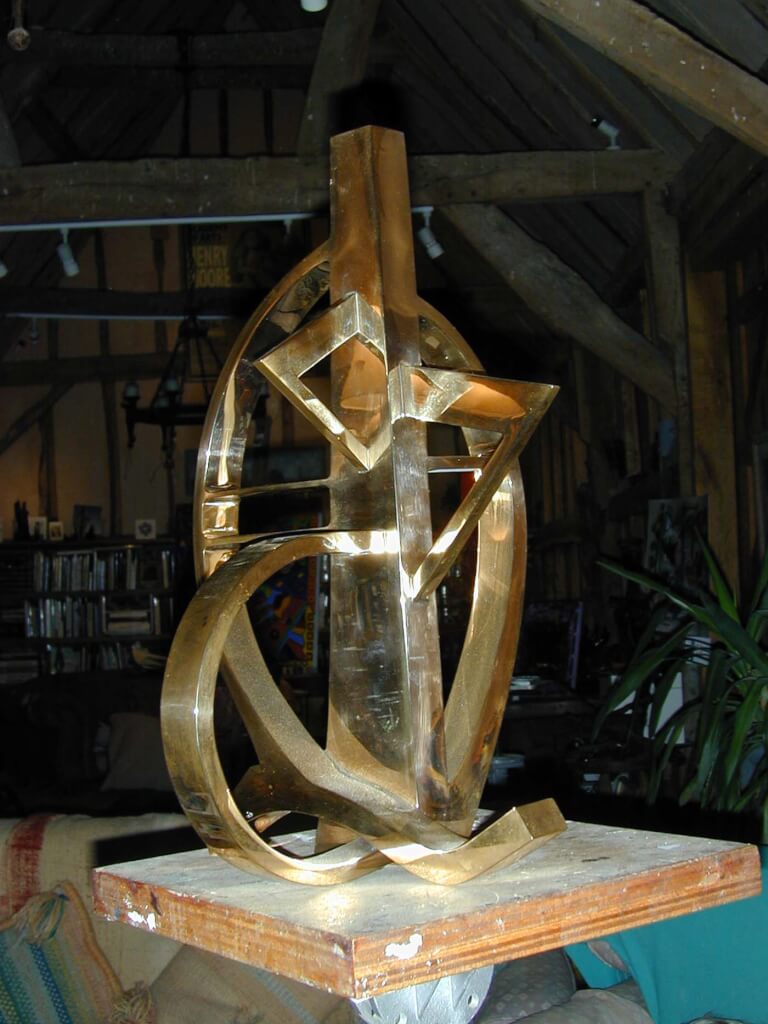 I was duly commissioned, designed all the maquettes (an individual one for each country), casting them in bronze. I was invited to present them at the Foreign Office, which I did and a deal was concluded subject to the bank being sited in London.

Very sadly the bank went to Frankfurt and this commission never happened. You don’t win ‘em all !

Meantime, the slightly larger 21” maquette was duly cast in bronze by the Burleighfield foundry and a polished version made by Susse Freres foundry in Paris.  Only two polished copies were made as it takes weeks for a specialist artisan to make a polished bronze with no flaws, like a Brancusi.  One is still available, but it’s expensive!

The enlarged version, at 2 metres, was also exciting.  It was commissioned by a property company, The Rosehaugh Co-partnership, who were building a new office block on the south bank of the Thames, in London, near Albert Bridge

The building was STERLING HOUSE and the image of my sculpture became its logo even to being engraved on all the glass doors.

The work was unveiled by the Member of Parliament for Wandsworth at the formal opening of the building. 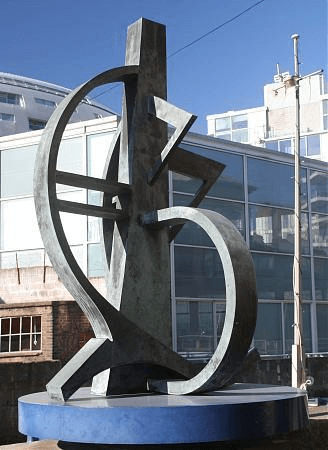 The 2m sculpture outside Sterling House in London.