A Prayer for Lebanon

A Prayer for Lebanon

It was 1972 and my first wife Sue and I were invited to Lebanon for our honeymoon.

One afternoon, after a typically late lunch, in Tripoli on the north coast, ending at about 10pm, our friends finally took us up to Bsharri, a village perched on a small plateau at the edge of Wadi Qadisha and where Kahlil Gibran was born on 6th January 1883. There, in what is known as the Sacred Valley, we found the Gibran Museum.

Would you believe we arrived after midnight?! My friends knocked up the museum keeper who promptly invited us in for drinks and to smoke the ever-circulating Hookah Shisha pipe. Eventually at about 2am we got in to the museum and that was a life changing event for me. I had read ‘The Prophet’ extensively. Sue had introduced me to it before we travelled.

The Prophet was written in 1923 in New York. It became one of the best selling books in the world and he became the third best selling poet in the world with Shakespeare as the No 1. In 1912, as a young man, Kahlil Gibran (1883 -1931) had been taken by his mother, together with all her family, to live in Boston, USA, after her divorce in Lebanon.

Think about this whole scenario, it seems amazing given the difficulty of transport to the other side of the world. Once in Boston, Gibran met Mary Haskell who, realising his potential as a 30 year old artist writer and thinker, sent him to the Beaux Arts in Paris where he is reputed to have met the elderly Rodin (1840 -1917) and was also heavily influenced by the drawing of William Blake.

With all this as a background, I had looked at the drawings of Gibran in the museum and held some in my hands. At this moment I conceived the idea that Gibran’s work should be made three dimensional. He was devout and had a great interest in the Bahá’í faith and had met ‘Abdu’l-Bahá, the founder of the religion. His drawings were quite mystical.

So… much, much later my idea began to come to fruition. When I began to sculpt it was a ‘divine intervention’. I had caught Hepatitis B from a needle stick injury from a patient in my surgery and when the virus hit I was confined to my bedroom for nearly 4 months.

As I recovered I began to sculpt, all I had ever made before was a coil pot at school! The first work I made was Almitra, the mythical lady from The Prophet who asked the questions….” Speak to Us of Love…..Speak to us of Children”….there are 29 poetical themes. Here surely were the seeds of a ‘Gibran Park’ filled with sculptures echoing the themes of each poem.

I made this second work of Almitra to portray my horror of the fact that war had started in Lebanon not long after my visit in 1972. It was by now 1987 and the Christian Muslim Jewish middle eastern conflicts raged,as they have done and sadly, still do. Here is Almitra with a Moslem Berka but with her hands in Christian prayer, my interpretation of ‘A Prayer for Lebanon’. You will see other works from The Gibran Series in my portfolio and no the park has NOT yet come to fruition. How it nearly did at Maryland University, near Washington DC, is a separate story! 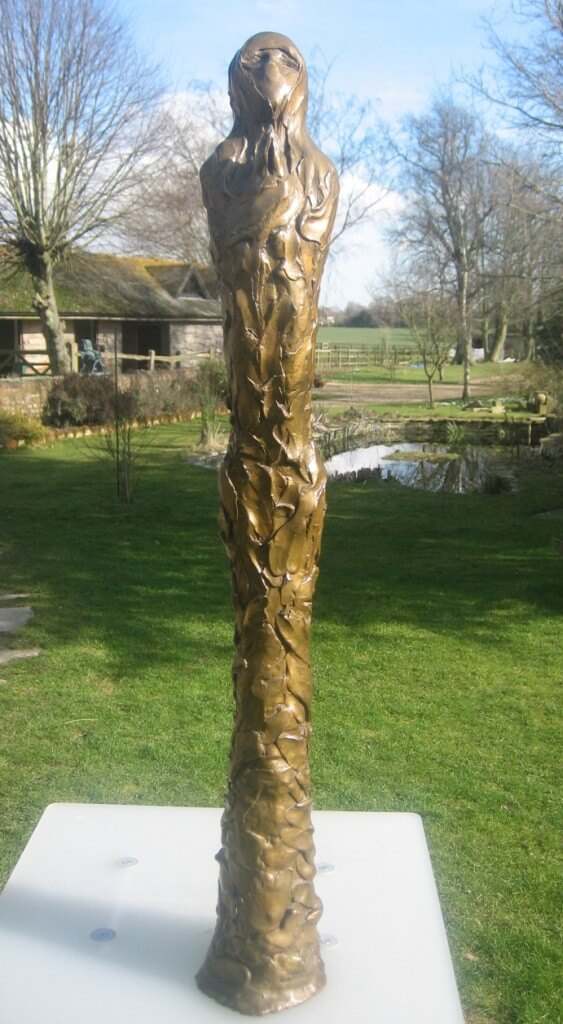