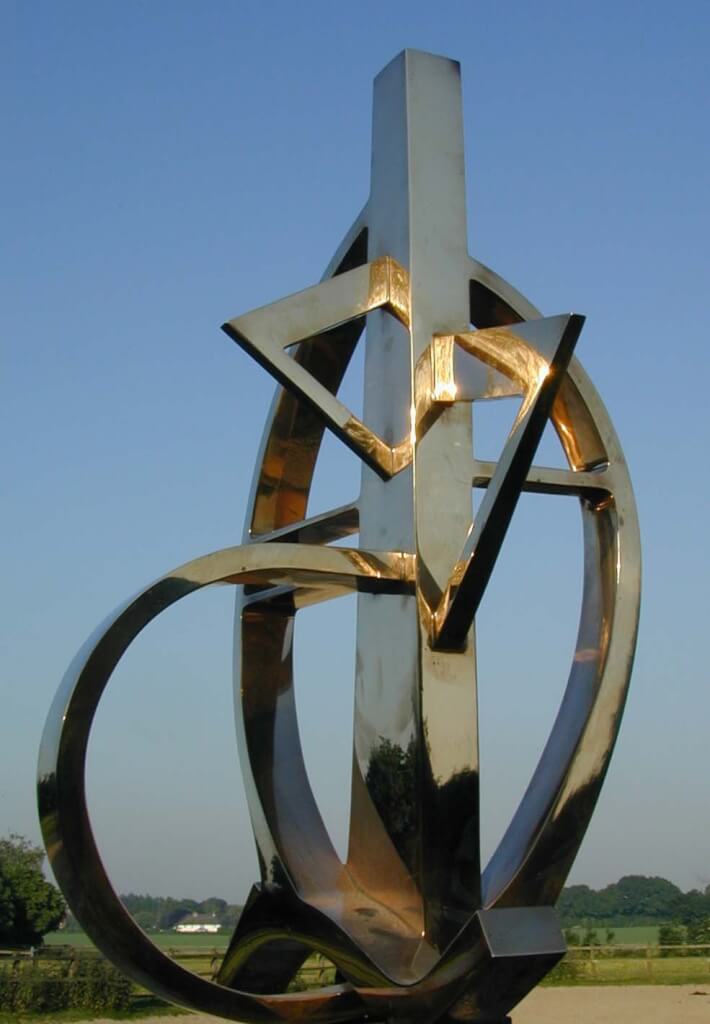 Click on the picture above to see a video by Neil about how his Sterling sculpture came to be.

Here is a polished bronze cast made by Susse Fondeurs in Paris.  I have also had a small maquette made with a verdigris-type patination which you can see in the video above.

Here is a polished bronze cast made by Susse Fondeurs in Paris.  I have also had a small maquette made with a verdigris-type patination which you can see in the video below.

Click on the picture above to see a video by Neil about how his Sterling sculpture came to be.

The style of this bronze was inspired by the cubist sculptor, Jacques Lipchitz.

It depicts the ‘Battle of Europe’ between Sterling and what was originally called the ECU, the European Currency Unit which briefly, and mostly theoretically, preceded the EURO.

A bronze cast of this work 220 x 120 x 120 cm can be found at ‘Sterling House’, Ransomes Dock which is on the south side of the Thames near Albert Bridge in London. The wooden pattern for this work exists at Neil Lawson Baker’s studio.

There are two smaller editions cast in bronze. One is a bronze edition of 8, patinated and part-polished and cast by the Burleighfield Foundry.  The other edition of the same size and weight was to be 8 in number but only two were ever cast. They are 55 x 35 x 35 cms and weigh 14.5kg each.  They were made by Susse Fondeurs in Paris when they were based in Arcueil. This most famous of French foundries was started by the Susse Brothers in 1758. These two casts of ‘Sterling’ in hand polished bronze were made by the same craftsmen that made the posthumous and controversial polished works for the Brancusi estate in Paris between 1992 and 2010. The finish is exquisite – it is very highly polished and looks almost like gilt.

There is also a small bronze maquette 13 x 8 x 8cms unnumbered. While Prime Minister and before becoming Lady Thatcher, Margaret Thatcher invited Neil to her office at The Palace of Westminster. He presented her with one of the small maquettes of ‘Sterling’ in patinated bronze mounted on a marble base which she kept on her ministerial desk. She then commissioned similar designs; one for each of the then 12 member states of the EEC.  She got architects to design a sweeping curved entrance to the proposed European Bank for London. She envisaged a semi circle of flags similar to that in front of the UN building in New York and the sculptures below them.

The sculpture designs were duly completed and then presented to, and accepted by, the Foreign Office. They would have been enlarged to about 5 metres tall and cast in bronze to front each national flag. But it was not to be… …the bank went to Frankfurt and this dream never materialised. Rhodia Bourdelle (the surviving daughter of Antoine Bourdelle, the famous and prolific French artist and sculptor friend and contemporary of Rodin’s when he was in Paris) displayed the polished bronze at the Musée Bourdelle and later, unknown to one another, we both visited the mega exhibition at The Yorkshire Sculpture Park of Bourdelle huge works. I wrote and congratulated her on the Yorkshire exhibition and the letter was her reply. She had the kindness to reply to me and a copy of the letter is shown here, together with an enlargement.

You will see that it is addressed from 16, Rue Antoine Bourdelle which is now the main Bourdelle museum in Paris which Rhodia curated and where she lived until her death in 2002.

I was deeply touched by your letter and beg your pardon for taking so long in answering.

Father’s exhibition in Yorkshire was a great joy for me and I am very happy to know how much it impressed you.

Concerning your own works, I find them extremely interesting and I congratulate you.

Father always aimed at the equilibrium between spaces, volumes and the outlines of objects and I believe that it is also your research.